Kids and their iPods:Changing the way Children Listen 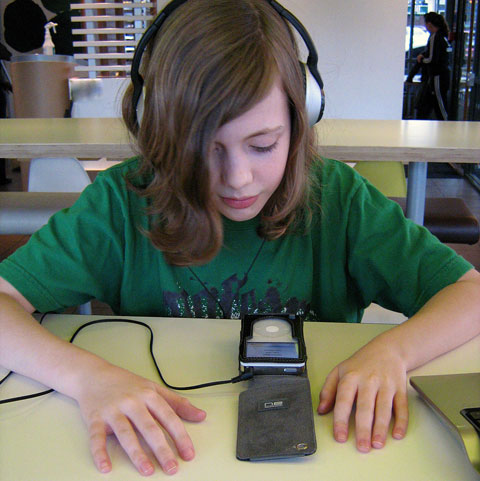 We’re not used to really big numbers in music teaching and 300 million is a really big number! It’s the number of iPods that have been sold since their launch about 10 years ago. A game changing bit of technology: not least because, through iTunes, they’re now connected to a catalogue of some 28 million tracks. And, of course, while iPods are still the most popular portable media player, they are far from being alone: Creative ZEN, Sony Walkman, Philips, and Archos, to name a few. Indeed, many cell-phones now work as excellent MP3 players.

Big changes
So what has this decade of change meant for the kids in your class? Well, as you’ve probably noticed, the age that kids get their iPods has started to decrease. In the US, nearly one third of children between six and ten have a portable media player, as reported by the NPD group. And this survey is supported by work from C+R Research. They indicate an even bigger proportion, that over half of 8- to 9-year- olds now have portable music players.

More music?
So, has this changed how much kids listen to music? Yes, is the short answer.Of course,watching TV is still the most popular activity. But listening to music is a very close second; and, because of MP3 players, they’re doing even more of it.

What has remained constant though, is the rise of music-listening during childhood. While an 8- to 10-year-old averages just over an hour of listening; for 15- to 18-year-olds they’re managing to fit in more than three hours a day. And, for the younger group, they’re listening via a portable player for about twenty minutes of that, while the older kids are plugged in to theirs for more than an hour and twenty minutes.

Gender equality
One change that I don’t think anyone would have predicted with the rise of iPod popularity, is that it’s reducing the gap between the listening done by girls and that done by boys. Over the decade, girls have listened to more music on the radio and they’ve played their CDs more. But boys love their MP3 players just as much as the girls. Across the ages, both genders spend over forty minutes a day listening to their downloaded tracks.

But there’s more
Let’s not forget the sharing aspect of an MP3 player: ear-buds handed round; best friends daisy-chained together with an ear-piece each. Or the exponential increase in diversity, quantity and accessibility of music sitting in the pockets, pencil cases and school bags of our classes. As something that was pretty important to their lives a decade ago, they’re now devoting even more time to music. So the evidence, it seems, shows that the iPod is changing the way our children are listening to music. Which leaves the question: is more always better?