I can’t believe this, but we forgot to post about who won the iPad from our very successful Virtual Music Education Conference held in July earlier this year!!

To be in the running for the iPad, entrants simply had to write a one line summary of their main “take away” point from each of the 12 speakers in the conference on a feedback form.

All of the entrants took amazing care of their answers and we randomly selected one to be the winner.

Congratulations to Leanne from QLD Australia who won the iPad. She was even kind enough to send us this great photo of herself with the iPad once she got it. 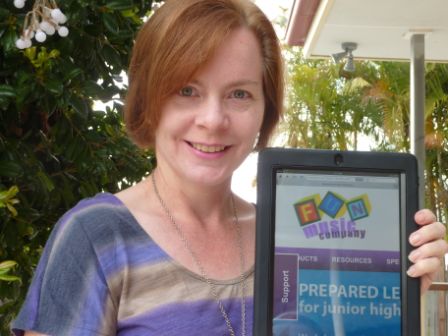 As a result of the 2013 conference we were able to put lots of money back into music education all over the world. So it is a great way of getting much needed $$$’s back into where it’s needed most in schools and foundations supporting music while doing some personal development at home and being accredited for it.

Right now, preparations are already underway for another Virtual Conference to run again in 2014. So have a think about what speakers you’d like to hear from in 2014.. and be ready when we ask soon for nominations!