Teaching The History of Rock and Roll?
Here are 15 prepared lessons with everything you need to make this entertaining subject easy for you and save you many hours preparation time. 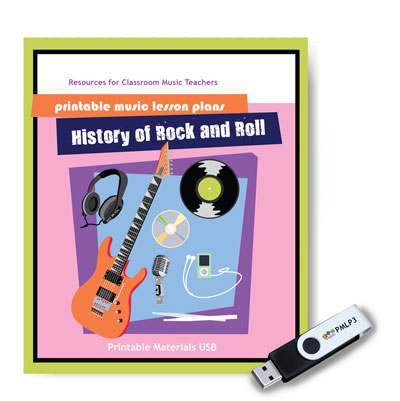 If you are teaching this important subject in schools, in this resource you’ll find everything you need to get started with this subject…. even if you HATE Rock Music!

One of the most difficult parts of teaching this subject is the hours and hours of research that goes into it. You really do have to know everything about these bands, as the students will often know a lot about them, and you need to be “one step ahead.” With this module we’ve already done lots of the research for you, so you can just have a quick read, then walk into the classroom.

This module features fifteen lessons starting with looking at fifties Rock and Roll, with Bill Haley and the Comets, Chuck Berry and Elvis. We’ve balanced the course so that it doesn’t stay on these “old guys” for very long, it pretty quickly moves through and looks at all the different milestones and musical styles that make up Rock and Pop music today.

Here is the breakdown of the fifteen lessons:

Lesson 1
How did Rock and Roll Begin 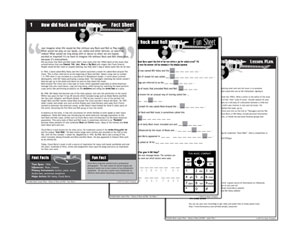 Students will love learning about the first Rock and Roll bands – how Bill Haley brought Rock to teenagers through the movie “Blackboard Jungle”, and Chuck Berry and his famous “duck walk”.

Lesson 2
The King of Rock and Roll 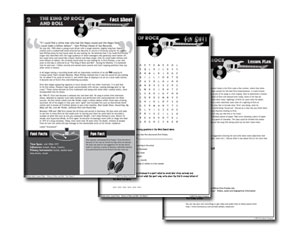 In this lesson students will learn about the meteoric rise of Elvis Presley to prominence in the 1950’s, and the reasons why he is regarded as the “King of Rock and Roll.”

Lesson 3
The Day the Music Died 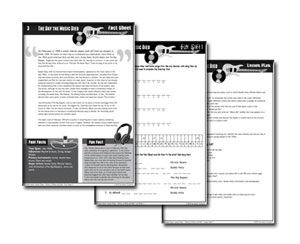 Students will learn about one of the most important events in early Rock History – the plane crash that shaped a generation, and later inspired Don McLean’s song American Pie. 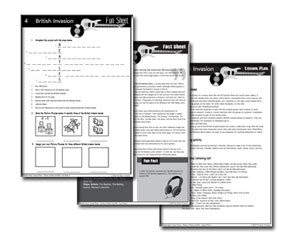 In this lesson students will learn about the phenomenal impact of the Beatles, The Rolling Stones and other bands who were dubbed “The British Invasion.” 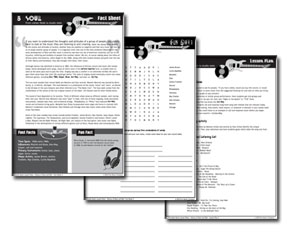 Learn about essential soul musicians who influenced Rock and Roll, including Aretha Franklin, James Brown and others.

In this lesson students will learn about the roots of Soul Music, and enjoy fun activities related to the Motown and Stax record labels. 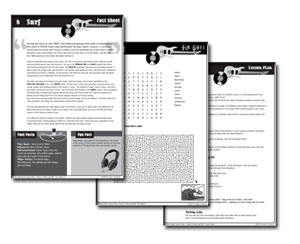 The Beach Boys, The Mama’s and the Papas, Surfaris & The Ventures and others.

Learn about the clean cut Surf Bands of the 1960’s and how they dominated the charts with easy listening melodies. 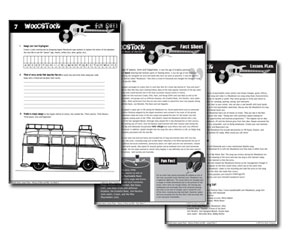 Artists who performed at the Woodstock Music Festival and others from the era including Jimi Hendrix, Janis Joplin, Cream and The Who

In this lesson students will learn about this influential music festival in 1969. Just exactly what was so special about this time of love, peace and happiness for the people who were at this event? 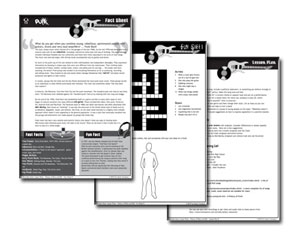 The Sex Pistols, The Ramones and other bands who led the radical Punk Movement in the 1970s through to today.

In this lesson students will discuss what was behind the punk movement when it emerged in the 70’s, and why it still exists today. 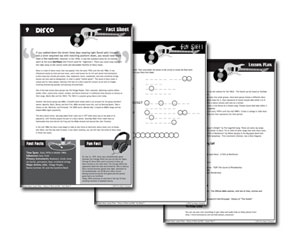 The Village People, ABBA, and other artists from this memorable era of the 70’s and 80’s.

in this lesson students will explore exactly why Disco became popular in the 1970’s and 80’s, and why it lost popularity just as quickly, yet still has a “cult” following even today. 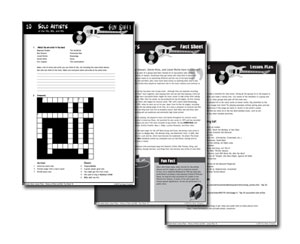 In this lesson students will explore the music of the popular solo artists from the 1970’s through to today. Just what makes a solo artist popular? and how did these people become household names? 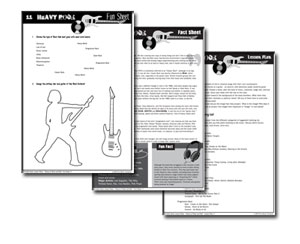 This Lesson explores the various Rock styles that continued to emerge in the 1970’s and throughout the 1980’s until today. Bands such as Led Zeppelin, Deep Purple, KISS and Bon Jovi

‘Classic Rock’, ‘Glam Rock’, ‘Hard Rock’, ‘Heavy Metal’ and ‘Progressive Rock’ are all compared and discussed in this lesson 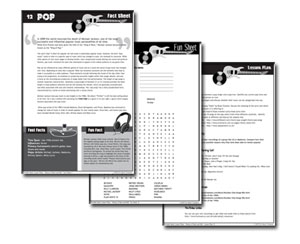 In this lesson students will explore what makes a perfect “pop” song, and what defines “pop” music today. 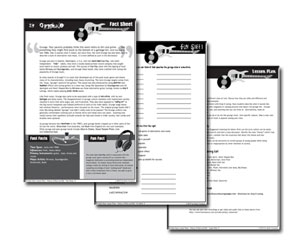 The Grunge movement of the early 90’s featuring Nirvana, Soundgarden and Pearl Jam.

In this lesson students will learn about what made up the “grunge” sound of the early 90’s and how it was a rejection of the “glam rock” style that came before it. 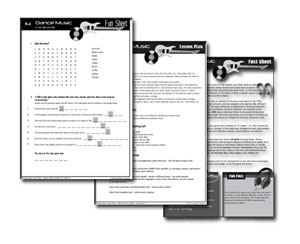 Dance Music – How it has evolved from Disco to the nightclubs of today.

In this lesson students will explore the sub genres of Dance Music today including House, Trance, Drums ‘n’ Bass, Hi-NRG, Techno and Electro. 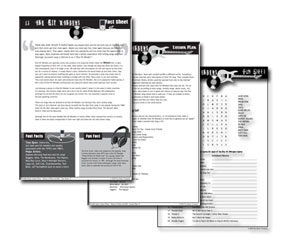 You’ve heard the song, but do you know the name of the band?

In this fun lesson students will learn about some of the one-off hits to have appeared in Rock music in the last 30-40 years.

Choose between complete Fact Sheets and “Fill in the Blanks” versions

Every lesson contains two fact sheets – one that has all the information, and one where important facts have been left out, for students to complete during the lesson. You can choose whichever of these is most appropriate for your class. 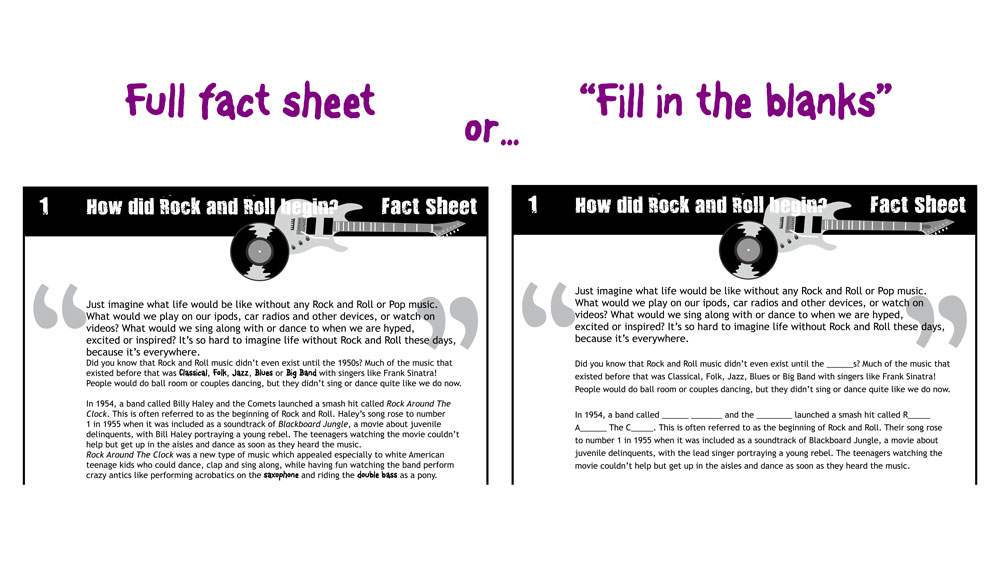 This module contains everything needed for 15 fun lessons all about the history of Rock and Roll. You can pick and choose the lessons you want to do, and mix around the order if you wish.

An extra page of activities that you can use at any time throughout the unit, or to fill in an extra lesson (or two!) at the end!

This annotated Glossary includes all the “Rock Lingo” which has developed over the last 30-40 years. The words found in the Glossary are highlighted in the fact sheets with a special font, so students know they can look out for them.

Answered Versions of all Fun Sheets

An extra page of activities that you can use at any time throughout the unit, or to fill in an extra lesson (or two!) at the end!

Ready to print student workbook with all fact sheets, fun sheets, listening logs and the glossary, ready to print out and bind for the entire modules work for the students.

Bonus #2
Powerpoint Slides Ready to use

This package also includes prepared powerpoint presentations, ready to load into your projector or digital whiteboard. These match the examples in the “fill in the blanks” factsheets, so students can complete the factsheet as they talk through the lesson material.

Students will love to compete with each other to find the answers to the trivia presented on the board.

We have a resources section of the website containing convenient links to purchase suitable recordings using itunes, and links to search for performances and music videos on YouTube. 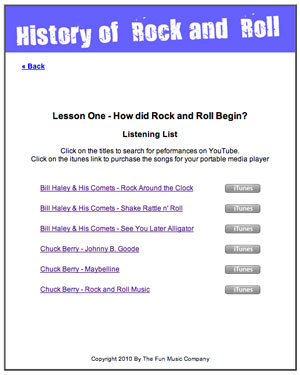 If you’re teaching about the history of Rock one thing you will definitely need is a completion assessment, final test or exam.

Because these units are used for many different year levels we have provided a choice of three different assessments:

You can of course use more than one of these assessments if appropriate for your students. Like all of our resources, it is up to the teacher how best to implement them in the classroom.
Get It Now »

How long does each lesson last?

You can take your time over each lesson if you wish – stretching them out over two or three weeks, or you could cover all the material in one school lesson. Its completely up to you, as the materials are designed to be very flexible.

What age group is this for?

This module is designed for Junior high school level (Ages 12-14), but it can easily be used for other age levels. This module is a good general knowledge course for anyone wanting to know about the context and history of Rock and Roll.

How easy is it to print out and prepare?

You can
print out just what you need for each lesson, or you can print out the entire student workbook at the start of the unit.

How much is it?

Printable Music Lesson Plans Modules are $39.95 per module. This includes all 15 lessons, all the printable bonuses and powerpoint presentations.

You have the right to print out as much as you need for your teaching. The only restriction is that you can’t re-sell or share the license with anyone else. It’s just common sense!

If you find you can’t use these materials just contact us for a no-questions-asked refund.