Young Children's Listening: What are they choosing? 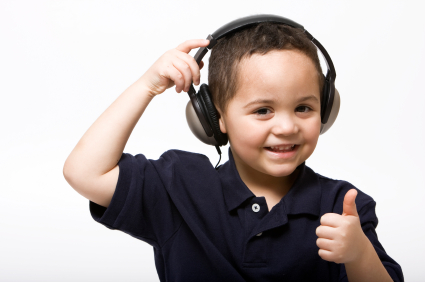 Even very young children now regularly use digital media. Research published in
the US, done by Common Sense Media Research, found that nine out of ten 5- to
8-year-olds have access to a computer. Over one fifth of that age group use a
computer at least once a day. And, slightly less than that, some 17%, play video
console games each day. And more than a quarter of all parents have
downloaded an “app” for their children to use on some smart phone, or other
portable device.

These are significant changes that come on top of them watching TV for an
average of hour and forty minutes, reading or being read to for 30 minutes, and
listening to music for 30 minutes, each day. It is an indisputable fact that a most
children grow up in a world awash with digital media.

As we are all well aware, these changes have not gone unnoticed by the large
media organisations. It would be impossible to discuss children and their
developing tastes in music without talking about Disney. Over the last decade, in
what has been a difficult time for most parts of the music industry, Disney has
powered ahead with music aimed directly at the kids market (ii). We now have the
High School Musical movies, singers such as Miley Cyrus (of Hannah Montana
fame), Selena Gomez and Demi Lovato, plus characters and music from Disney
animations. In the UK Children’s Video Charts this week, you’ll find The Lion
King, Lady and the Tramp and Tangled – to name just a few. Not that I’m
suggesting this is necessarily a bad thing. My earliest memory of jazz has to be
from The Jungle Book, and I paid good money to see High School Musical III in the
cinema!

However, it would seem that the introduction of child-friendly, “safe” pop music,
that parents are happy to buy, has led to further changes. Research suggests that
children are now “growing older younger”(iii). Music that was once aimed at 10- to
12-year-olds is now getting even younger listeners. Nursery rhymes and songs
learnt at pre-school are quickly considered to be too ‘babyish'(iv). I think that
children see this move to pop songs as a move towards more ‘sophisticated’
music choices. The age of the ‘tween’ is rapidly shifting lower.

A further change is the fact that due to the quality of the production of this
music, it has actually become established in the mainstream music charts.

Performers like Justin Bieber can’t get their chart-topping success by just having
children as their audience. Following on from that, you can see how the trend in
new boy bands, such as One Direction and The Wanted is likely to continue.
Parents don’t have to just endure their children’s music, they can actually enjoy it
as well.

More than the music

Now, you can’t mention One Direction without talking about the incredible rise of
the audition shows on TV – The X Factor and the like. Directly aimed at family
audiences, and with content built exclusively around a concept of “safe” pop.

You can also see this earlier shift to pop music through the rapid rise of dance
and karaoke based games for consoles such as the Xbox, Wii and the Playstation.
Here, young children are able to have an immersive and interactive music
experience in a pop music world.

It is possible that, in this brave new downloadable world, the age of child specific
music much beyond the age of five, six or seven, is slowly coming to an end. Our
world seems to overlap with so much of theirs. The trouble is, we won’t know for
twenty years whether this is a good thing or not. In the meantime, we might as
well roll out the interactive dance mat and see who can get the highest score!